Golf is just the beginning

Members of The Royal Ottawa Golf Club share a bond that transcends golf. Although our love of the game first drew us to the club, the camaraderie that surrounds the sport transforms us into regular visitors.

The Royal Ottawa Golf Club is a premier private golf club with a rich heritage, providing an exceptional Member experience.

In order to make this vision a reality, The Royal Ottawa Golf Club will:

Members and Staff of The Royal Ottawa Golf Club will embody the following core values:

The Royal Ottawa is one of the oldest golf clubs outside of Britain. It was founded in the spring of 1891, in the dying years of Queen Victoria’s reign, by a group of business and professionals who decided they should organize themselves “for promotion of this healthy and satisfying game.” The inaugural meeting was held in the old Russell House Hotel on April 20.

Known as the Ottawa Golf Club, it was designated “Royal” in 1912 by permission of His Majesty King George V.

The members elected as their first president Hon. (later Sir) Edgar Dewdney, a minister in Sir John A. Macdonald’s government and one of his most faithful followers. After serving a one-year term as president, he left Ottawa to become Lieutenant-Governor of British Columbia.

The first nine-hole course was on 50 acres of land lent to the club by Charles Magee, a real-estate developer, in Sandy Hill, on the banks of the Rideau, just west of the old Rideau Rifle range. There was a small clubhouse near the end of Gladstone Avenue, overlooking the course. 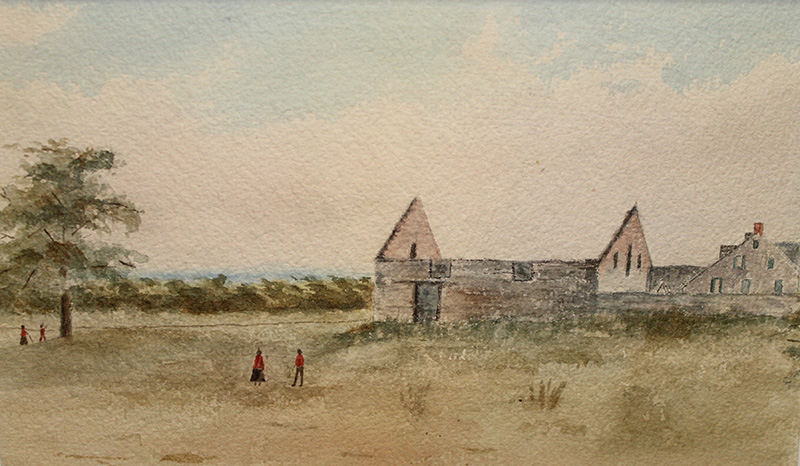 The first Canadian Amateur Championship was played over the Sandy Hill course, with its deep sand traps, ditches and even a swamp, in June, 1895. Tom Harley of Kingston won the silver challenge cup offered by the Governor General, Lord Aberdeen. Alexander Simpson of the Ottawa Club was runner up.

As Sandy Hill became a more fashionable place to live and property values increased, the club found a new site in Quebec, a mile north of Hull, along the old Chelsea Road. For $15 a year they leased 108 acres of farmland and, along with it, the old Brigham homestead for a clubhouse. The building, which still stands at 376 St. Joseph Boulevard in Hull, once belonged to a son-in-law of Philemon Wright, founder of the city. For a number of years it was a restaurant called Ferme Columbia, after Wright’s farm.

The course consisted of 12 holes, crossing and recrossing the Chelsea Road, and one had to play six of the holes twice to make up an 18-hole round.

In 1901, in order to buy the house and land from the owners, the club became legally incorporated under the laws of Quebec. The following year, the club sold the property to a cement company for a net profit of about $12,000, and went looking for another site.

The Committee, after considering a number of properties in the Ottawa area, settled on the McVeity farm on the Aylmer Road, site of the present club. On three acres of high ground that was Mrs. McVeity’s apple orchard, they built a comfortable and elegant clubhouse which a society columnist of the day described as being “worthy of being the Golf House of the capital of the Dominion.”

To design the course, they engaged Tom Bendelow of Chicago, reputed to be “the best expert on such matters on this side of the Atlantic.” Mr. Bendelow’s design was later amended by Willie Park, Jr., winner of the British Open in 1887 and 1889.

The clubhouse was officially opened with great ceremony in the spring of 1904. Five years later it burned to the ground.

On the night of October 20, 1909, fire broke out in the lockerhouse and then leaped 40 feet to the dry shingles of the clubhouse roof. The fire departments of Hull and Ottawa were of no help, and members spent the night fighting the flames and rescuing the club’s furnishings.

A hundred members showed up for a meeting the next day in the City Council Chamber and began planning to rebuild “with all possible despatch.”

A new clubhouse was erected on the same grand scale but 21 years later it, too, burned down. It was lunch-time on November 10, 1930, and Viscount Willingdon, the Governor General, and the Viscountess, were entertaining a small party when the headwaiter advised them that the building was on fire. His Excellency and his friends joined the other diners in carrying the club furniture, silverware and other valuables out onto the lawn.

As they had done 21 years before, the members met the day following the fire to make a fresh start. The present clubhouse, which reflects the grace and charm of its predecessors, was officially opened on September 19, 1931, by the Governor General, the Earl of Bessborough.

Members of The Royal Ottawa enjoy a lively social season but their principal interest is golf and the club has produced some outstanding players.

The course record was established on June 18, 1979, by Eric Kaufmanis who scored 29-33-62. His card comprised nine pars and nine birdies.

One of the club’s best golfers was Mrs. W.G. Fraser, who was made an Honorary Member in 1934 in recognition of her winning the Canadian Ladies Golf Association Championship for the second time. Before her marriage, as Alexa Stirling, she won the U.S. Women’s Amateur three times in a row. Mrs. Fraser was Royal Ottawa ladies’ champion nine times.

John H. Oke, one of the club’s first professionals, won the very first Canadian Open on the Royal Montreal course in 1904 with a 36-hole score of 156.

The Royal Ottawa had the privilege of hosting the 2000 LPGA which was won by Meg Mallon . Average scores of all players exceeded par which attests to the quality and challenge of The Royal Ottawa course.

Although the appearance of the Clubhouse appears little changed over recent years, it has in fact been thoroughly upgraded with kitchen, mechanical facilities, pro shop and club storage among many time-to-time improvements. In 2002, a massive renovation was undertaken, creating wonderful new lounges, locker rooms, shower and restroom facilities.

The Royal Ottawa remains true to its heritage with regal conditions abounding inside the Clubhouse and around its 27 holes and splendid practice facilities.

The Royal Ottawa Golf Club prides itself on continually upgrading its facilities to ensure that members and guests are welcomed with an elegantly decorated Clubhouse.

The original oak floors have recently been carefully refinished and plans are currently underway for upgrades to the Main Lounge furniture and carpeting.

During the Summer of 2012, four holes on our Royal Nine Course were closed and completely redesigned. This improvement promises to be a wonderful change to a gem of a course.

In 2008 the Club undertook an extensive renovation and upgrading of our practice facilities. This project included the expansion of the natural grass teeing area, the creation of two target greens, a new practice fairway bunker, and a completely re-graded field complete with irrigation and a new yardage system to aid in both practice and teaching methods.

Since 2002 The Royal Ottawa embarked on a major restoration of the beautiful heritage Clubhouse rebuilt in 1931 after two devastating fires to the original structure built in 1904. This included tasteful facelifts to modernize the decor to both the President’s Lounge and the Dining Room; a fresh new face to the Alexa Fraser Lounge and Sunroom; the main lounge was elegantly redecorated, and the kitchen is currently being expanded.

Although the appearance of the Clubhouse appears little changed over recent years, it has in fact been thoroughly upgraded with a newly renovated kitchen, mechanical facilities (a beautiful, air conditioned Pro Shop; an efficient club storage area and a stunning verandah and patio overlooking the course.

Our two golf courses now feature a new state-of-the-art watering system and the Royal Nine has been vastly improved with challenging new holes, and interesting new greens on several others. 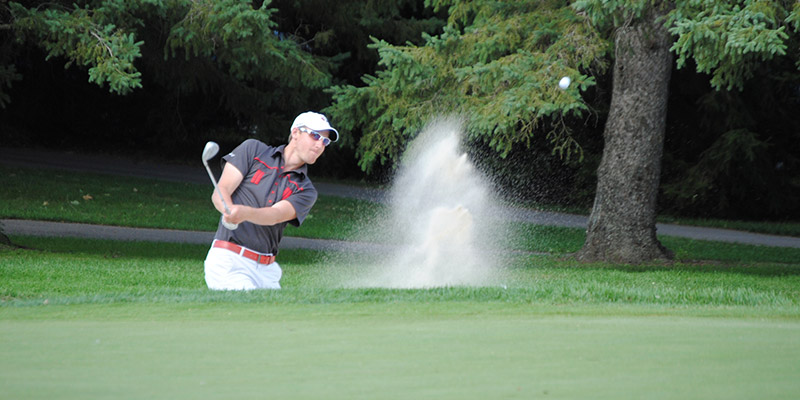 On the course, many upgrades have been done including: a complete bunker renovation including drainage and the installation of a high quality sand, ongoing tee improvements including leveling, resodding and expansion, and extensive drainage work, all of which are geared at providing optimum playing conditions for our members.

The Royal Ottawa remains true to its heritage with a regal setting both inside the clubhouse and around the 27 golf holes and splendid practice facilities.

The Royal Ottawa Golf Club is pleased to be able to maintain such vigorous improvements while maintaining its fiscal responsibility and providing exceptional service to our members.

In 2019, the Royal proudly unveiled a state-of-the-art, double-sided Driving Range and new Academy Building, both powered by TrackMan technology.

See our Golf page for more info on the Royal’s new Range & Academy.

Since 2019, the ROGC Charity Classic has been pleased to partner with Ronald McDonald House Ottawa. RMHOttawa will host their tournament this summer at The Royal Ottawa.

From 2016-2018, The Royal Ottawa hosted the Sens Foundation tournament each September, just as spring training was beginning. Sens Foundation raised over $225,000 for the local charities it supports.

From 2013 to 2015 , the charity golf tournament was hosted by National We Day Canada (a one-day event held at Canadian Tire Centre for local youth).

The Royal Ottawa was pleased to host a charity tournament for the YWCA-YMCA from 2010 to 2012.
For more information click here.

The Royal has lent its support to the Ottawa Snowsuit Fund with three Charity Golf Tournaments, from 2007 to 2009, that raised over $275,00 for this worthwhile cause.
For more information click here

For three years, The Royal Ottawa Golf Club partnered with the Ottawa Hospital Foundation to raise over $750,000.
For more information click here.

The Royal has been pleased to open its doors to the Hopewell Eating Disorders Support Centre’s Charity Fashion Show and Silent Auction. In 2007, the association raised $70,000 at the Stepping out for Hopewell event hosted by the Royal Ottawa.
For more information click here.

From 1984 to 2003 the Royal Ottawa Golf Club hosted an annual Charity tournament for the Guide Dogs of Canada, raising over $500,000 in 19 years.
For more information click here.

To submit your resume for consideration, please email hradmin@rogc.com.